Rania Das and Tiare Kahana on the New Haven Green on Thursday. Photos by Lucy Gellman.

Rania Das moved slowly, carefully in time with the music. His arms stretched out, tilting towards the stage as his torso lifted skyward. She jerked her head to the left, then to the right, her eyes full of laughter. She dropped into a squat, her arms slicing through the air diagonally. In every move, she told the story of the trickster Lord Krishna, whose charm and beauty often excused his prankster side.

Thursday afternoon, Das brought Bharatanatyam at the New Haven Green as part of the inaugural Rhythm Exchange, an initiative of International Festival of Arts and Ideas and Owners of New Haven Green to bring music, dance and immersive performances to the heart of the city. From now until early November, it is scheduled to run from noon to 1:30 p.m. every two weeks. It ends with a Day of the Dead ceremony with Unidad Latina en Acción on November 3. A complete program is available here.

“It represents the diversity that exists in New Haven,” said Shelley Quiala, the festival’s executive director, as classical Indian dance gives way to c. “You will see as you go – some [events] are immersive, and some artists really juxtapose.

It marks the last effort of the owners to turn on green with arts and culture. Thursday featured the classical Indian dance form known as Bharatanatyam, Hula dancing and storytelling, and new jammy compositions from musicians Cliff Schloss and Avery Collins. Quiala said the series is part of her hope to keep the festival lineup going year-round. She worked closely with Kica Matos, one of the owners, to make it happen.

Just a little after noon on Thursday, 14-year-old Das took to the stage, layers of green and gold silk glistening in the midday sun. On her ankles, dozens of tiny bronze-colored bells called ghungroos awaited the first suggestion of movement. She took a beat and approached the microphone, watching a growing group of people as attendees streamed in. As she spoke, it sounded like someone much older than a high school freshman was sharing her knowledge.

“I think one of the reasons it really appealed to me was because it was something that really kept me close to my roots,” she said in an interview with the Arts Paper. after the performance. “Bharatanatyam is not from the state where my parents are from in India [they are from Calcutta, in West Bengal]but it is a very popular art form throughout the country.

As the music started playing over the speakers, Das moved on to an Alarippu, the first dance that Bharatanatyam dancers often do, and a way to introduce New Haveners to the age-old steps that build form. Sitar, tabla and tambura navigated the grass, weaving between his bent knees and outstretched arms. Her eyes widened, filled with a curiosity that gave way to a kind of glistening, playful delight.

It was the first of three offerings she brought into space. Between the Alarippu and the second issue, the Shabdam, Das explained that she tells a story through dance and movement. She told attendees that Shabdam honors Lord Krishna, the god of protection and compassion. And, she added with a smile, a total crook.

Every movement – from his head to his wrists and from his hands to his toes – was a nod to Lord Krishna’s love for a good joke. In the first part of the dance, a group of people slip into a pool of water, removing their saris as they bathe. While they are in the water, Krishna steals their clothes, “and then he will observe their reactions from the tops of the trees,” she said. Then he spots jars of cream – a delicacy Lord Krishna simply cannot resist. He pierces the jars with his fingertips and devours the sweet, cool treat inside.

She stepped back from the mic, her hands still on her hips as music erupted from a speaker through the warm air, surrounding her in sound. As the voice came, she raised her hands, her head moving to one side, then the other, then back again. His eyes flickered to her, then back to the edges of the stage, gleaming with mischief. Elbows still bent, she stretched out her arms. She moved forward, her feet touching the stage in time to the music, then crouched down just as quickly. The music moved her.

“I hope you enjoyed this art because I know I enjoyed sharing my art and my culture with the New Haven community,” she said before her third and final dance, the Vasantha Jathiswaram.

The jathiswarams, she continued, “are a demonstration of arivus, or steps, and sutras, or hand gestures, and they are performed to a variation of swaras”, passages which are part of a melody and a rhythm. She planned to dance to Vasantha, she added, which belongs to the Carnatic musical tradition of South India. Within moments, she was back in motion on stage, bringing hundreds of years of tradition to the Green.

Das, who grew up in New Haven and is a freshman at Hopkins School, started Bharatanatyam five years ago to continue a tradition. His mother, Manmita Dutta, grew up in Kolkata, where she attended an all-girls school that taught ballet as part of the curriculum. When Das was just a child, Dutta expressed a wish that her daughter “learn an art form like we had when we were growing up”. This led her to Das’s longtime teacher, Wilton-based dance teacher Jaynti Seshan.

Every weekend, Das and his parents pile into the car and drive from New Haven to Wilton for classes. It made her think about the similarities between Carnatic music, Western music and popular music between the two (she is a fan of K-Pop and likes to learn her dances, she laughs). When she plays, she says, she methodically counts her moves, as if a metronome is working overtime in the corners of her mind. In recent years she has been interested in the evolution of Bharatanatyam from a classical tradition to a form of activism and protest.

It also became a bridge to her parents’ country of origin. When she dances in New Haven — Thursday marked her first solo performance — she knows she’s a cultural ambassador in a way that many New Haven residents have never seen or heard of before. When visiting family in India, she said, “I feel like I found something new to talk about,” especially with the elders in her life.

“I think that way it brought me closer not only to my roots, but also to my family,” she said. 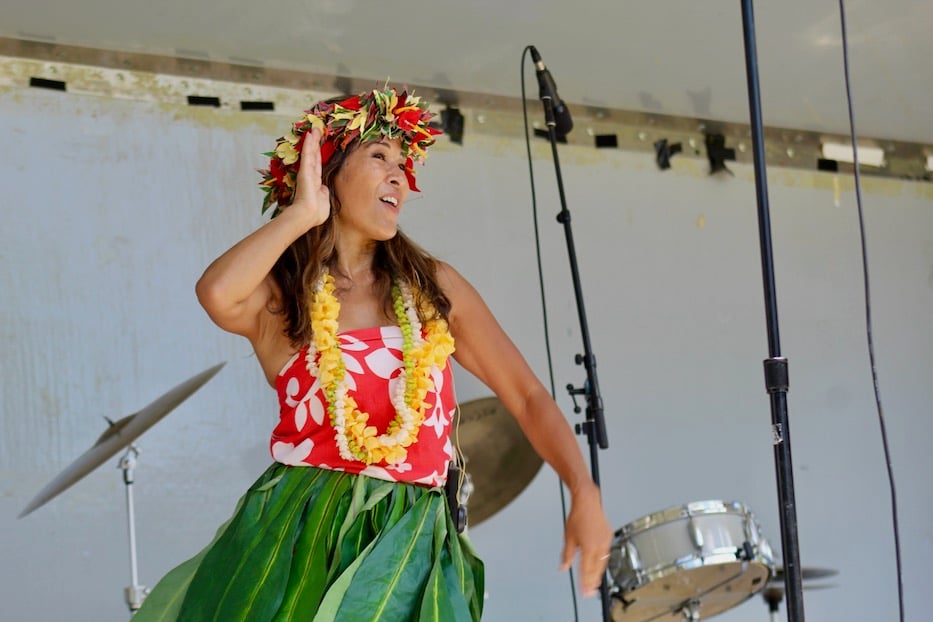 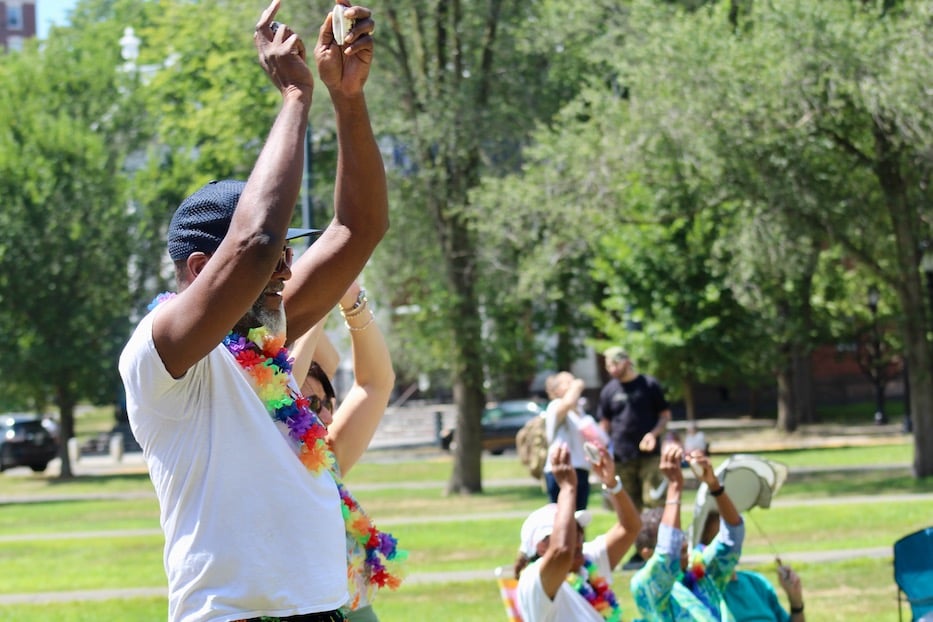 Tiare Kahana: “People understand that the hula is a sacred art, that it has sacred roots.”

Back on stage, Tiare Kahana swayed from side to side, directing the attendees as they lifted seashells from a basket on the grass, then moved alongside her. At the rising instrumentals, she stretched out her arms, and within them was a whole story of native Hawaiian history and culture.

Born and raised in Los Angeles, Kahana grew up learning about Hawaii from her parents, who lived there before moving to the West Coast. As a child, she says, she was surrounded by a Hawaiian community that is larger and more accessible than Connecticut’s, even though “we end up” in the state of Nutmeg. She made her way to Connecticut in 1987, and never left.

A teaching artist for Arts to Learn Connecticut, Kahana said she used to bring her work to schools and senior centers. In schools, she encourages students to call her “aunt”, to remind them that they are part of a large human family. In retirement homes, she sees how movement and music sometimes awaken memories that have been dormant for decades. She sees an easy way to remove harmful and lasting damage stereotypes of Hawaii and Native Hawaiians.

“The main thing is that we spread the aloha spirit,” she said. “When you raise people’s energy, when you dance, you remind them that we are a family… that we have to take care of each other. People understand that the hula is a sacred art, that it has sacred roots.

She also uses her craft to “encourage people to look at where they come from,” she added.

As she left the stage and returned to the warm grass, Schloss and Collins took her place. It was a little after one o’clock and it seemed, just a little longer, that the jam could possibly go on all afternoon.

Rhythm Exchange is an initiative of International Festival of Arts and Ideas and Owners of New Haven Green to bring music, dance and immersive performances to the heart of the city. From now until early November, it is scheduled to run from noon to 1:30 p.m. every other Thursday. The next session, September 1, will feature jazz and gospel. A complete program is available here.