Make Noise has unveiled the XPO Stereo Oscillator, the perfect companion to QPAS, X-PAN and Mimeophon as part of a stereo modular system.

I feel like it took a while to happen. We first saw the X-PAN and QPAS stereo modules in 2019. According to the press release, Tony Rolando of Make Noise has been dreaming about Pulse Width Modulation ever since (not all of us do). In particular, he was impressed with the voice panning in the Oberheim OB8 and the way PWM was used for waveform animation. This got him thinking about stereo pulse-width modulation and how it could feed Make Noise’s existing stereo modules. To cut short a long and fascinating journey, we have the XPO Stereo VCO.

Thus, the XPO is an analog oscillator with eleven outputs. There are five outputs for the four individual waveforms and the sub-oscillator in mono, and three stereo pairs. Everything else is about manipulation of the waveform and modulation in stereo.

You can start with three regular waveforms, triangle, sine and sawtooth. Using Stereo Vari-Timbre which was based on the Variable Shape parameter on the VCO ST0, you can push sine and sawtooth waveforms through a Buchla style crossfade to find pleasing combinations. Instead of a square wave, Make Noise went with a “Spike” which is a bit unusual but works great with a band pass filter mode on the QPAS.

The DPO module already had stereo wave folding and so it was an obvious idea to bring it to the XPO. It also allowed you to use a central “Shape” parameter, which could modulate both sides of a stereo signal from modulation.

Stereo Pulse Width Modulation brings a lot of richness to the sound and has been rewarded with its own output. This means you can easily use the stereo output with or without stereo PWM.

Throughout the module, you can modulate the left and right channels together or separately with the central parameters available on the Vari-Timbre and Wavefolder. Rounding out the module are the good old FM and Sync inputs, and a pair of 1v/oct inputs help with transposing or stacking melodies.

As usual with Make Noise modules, the front panel is an adventure all on its own. The scattering of icons and arrows can be a little confusing, but as you go, the XPO looks relatively straightforward. It has a distinctive Make Noise style and would go well alongside the QPAS and other Make Noise modules.

Here is the launch video where Tony goes into all the details behind the XPO.

Stereo signals in Eurorack are a bit constraining. This means having to deal with parallel audio lines. Which means that apart from the few stereo modules, you have to have two of everything else. It only makes sense that Make Noise would produce something that will use its existing stereo modules. But to get the most out of XPO, you’ll need these modules. The price has not yet been announced but we should see the module at the end of September.

There’s an upcoming video demonstrating the sounds of the XPO, which will air Wednesday, July 20 at 12pm EST. 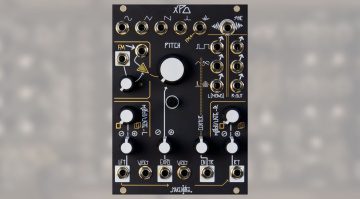