Eman AlHashimi at the piano.

Eman AlHashimi is the United Arab Emirates’ first female composer for orchestra and background music; She is also a certified international pianist, painter, poet, screenwriter and life coach, with a bachelor’s degree in human resources management and a master’s degree in strategic communication and public relations. 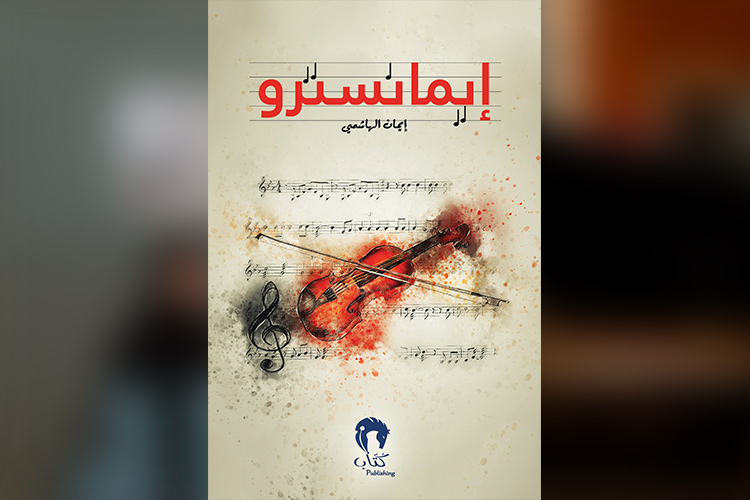 The book on music written by Eman AlHashimi.

Why did you choose to become a music composer?

Honestly, I didn’t choose to be a musician, but actually music chose me … as I hear it in me all the time. It has helped me express everything about everything – and that makes it a crucial part of me; and that is why we cannot be separated.

Why is the piano your favorite instrument?

I love all musical instruments, but the piano is the mother of all, and I feel like the piano gives me a huge HUG every time I put my fingers on it.

Write music or play music, which gives you more satisfaction? The two are the same, because the music is playing in my head either way. Even when I listen to it, I feel the same. However, playing physically makes me interact directly with the instrument. This is the thing that makes me feel that we are one and that the piano is a living being that speaks to me with my fingers.

Do you use Arabic instruments – like the oud for example – in your compositions?

I believe that music is one language and that all instruments are just different accents; thus, in effect, I use any instrument that matches my composition – noting that I am an orchestral composer, which means that one instrument cannot be enough.

Are you more influenced by Western music or Arabic music? Or both equally?

I never tend to treat music by its origin; I love whatever my emotions lead me to, regardless of anything else. A true artist must love art for itself: not where it came from.

How is it different from playing abroad and in the UAE?

It is an honor to represent my country abroad and a huge responsibility too. But to be honest with you, nothing compares to performing in front of my people, because I consider all UAE people and residents to be my own family, and they deserve to hear my music in the first place.

What’s your music book called? What is its content ?

Thanks for the question. My book is called Emanstro, which is a combination of my name (Eman) and (Maestro). He’s talking about all of the greatest musicians of all time. I managed them in different categories depending on the times, to make it easier and more understandable. There will be part 2 and part 3 or even more, to make it a complete encyclopedia for musicians.

What is the connection between being a life coach and your music?

Music itself is a healer of body and soul. It helps me become a better person. When you merge it with real education, the results would be impressive, more effective and more efficient.

How do you find your musical inspiration?

Life is my biggest inspiration! I see the people around me and what’s going on in the world and then I make my own words with music, without needing to speak.

I mean, we speak using our languages, but our souls speak music, by nature. For example, the rhythm of your heartbeat and the blood flowing through your veins, not to mention the sound of your breathing.

Who are the musicians who have influenced you?

As I said above, I always tend to hear the music itself, regardless of the composer or the origin. But in this case, I can say that they all influenced me, whether it was to follow in their footsteps or to avoid their mistakes. So I learned from everyone.