Barry Manilow’s longtime blacksmith Bruce Sussman can tell you exactly when he and the pop songwriter first crossed paths. “May 31, 1972,” he said recently with a certainty that cannot be doubted. Underlining this categorical fact, he added: “We are approaching our 50and birthday in a month.

More than 200 songs resulted from this encounter, including 1978’s “Copacabana”, a hit so big and enduring that it turned into a musical in 1994, playing for two years in London’s West End. But for half of their half-century, the duo have been writing and revising a deeply personal project: Harmony, their musical biography of The Comedian Harmonists. The show had its world premiere at the La Jolla Playhouse in 1997, and over the years there have been various versions at the Alliance Theater in Atlanta and Ahmanson in Los Angeles.

It’s a 25and anniversary version of the show finally coming to New York. If ever the goal was Broadway, they drastically overshot, landing in the drums of the Museum of Jewish Heritage, a production of the National Yiddish Theater Folkbiene, which staged the recent Jewish fiddler on the roof. Now previewing, it opens April 13 and will run through May 8.

Sussman clarified that Broadway was never really the target per se. “People are always talking about Broadway. It’s up to someone else to find out. Barry and I are keeping blinders on. We did 11 minutes of cuts last night. We have more today. Our goal is to make this show the best it can be.

It’s a true story they tell. Three Jews and three Gentiles reunite, via a classified ad, in 1920s Germany and form The Comedian Harmonists, a phenomenally successful song and slapstick band. (“Think Manhattan Transfer meets the Marx Brothers,” advises Sussman) Act One follows their success – millions of records, a dozen films, sold-out houses in prestigious concert halls around the world. The second act finds them tragically paying the price for their ecumenical DNA.

“Harmony actually opens with the week the band spent in New York,” Sussman said. “They played for the United States Naval Fleet which was in the Hudson. They played on one of the ships, and it was broadcast on all the other ships. When they finished, all the ships sounded their horns, scaring everyone in Manhattan to half death. It aired on NBC. Then they did City Hall and Carnegie Hall.

The genesis of the project was a New York Times review of a documentary that caught Sussman’s attention. “It was a very compelling review and a beautiful shot of six young men in white ties and tailcoats, with their shiny hair,” he recalls. “The Public Theater had a screening room where they showed documentaries and art films, so I went there and watched four hours of German documentaries with subtitles. This should have put me off, but instead it was absolutely breathtaking. I went straight to a phone booth and called Barry and said, “I think I found him”. I think I found the piece we were looking to musicalize.’”

Despite his involvement in pop music, it turns out that Manilow always wanted to write for the theater, but success got in the way. “I always remind him how his pop career ruined that,” Sussman said.

It’s true, Manilow said. “I wanted to be an arranger like Nelson Riddle and a composer like Richard Rodgers, that’s where I was going. I did arrangements for Bette Midler, then commercials, then arranged records and produced records. Never, never in a million years did I even consider being a performer. My big love was Broadway musicals, and that’s what I wanted to do.

At the time of Barry and Bruce’s initial connection, Manilow was taking small steps toward legitimate acting. “When we met,” Sussman recalls, “he had already written a hit show called The drunkardwhich collapsed at 13and Street Playhouse for 110 years. I said, ‘Oh, I got myself a theater composer. That’s what we wanted to do, literally, and then something called “Mandy” happened. Barry went down another path and took me with him.

As a team, they write more like Rodgers & Hart (words first) than Rodgers & Hammerstein (music first). “When Richard Rodgers was asked what came first, he said, ‘The contract,'” Sussman injected. If Manilow was asked that question, he said his answer would be, ‘The idea.’

“When I wrote the first draft of Harmony, there was no score,” Sussman said. “If I got to where I felt a song needed to go, I would write a staging paragraph that described the song. Maybe there was a title idea, maybe there had one phrase. I sent this huge draft to Barry to see if he could make sense of it, and he sent me back 17 melodies. Fourteen are still in the series.

Sussman’s notes push the right musical buttons for Manilow. “They sing for me,” said the composer. “That’s why I love working with Bruce. They sing just for me, off the page. He writes so musically that it’s really easy. I mean, when he sends me ‘Her name was Lola UH/ She was a showgirl UH’, you have to be an idiot not to be able to put a melody to that. He writes as a musician would write. When I’ve worked with other lyricists, I don’t even know where the chorus begins. Where is the verse? Does the chorus come back? They write and write and write, but Bruce writes music like he writes a scene. I hear it. It jumps right off the page.

Before starting the show, both soaked the atmosphere in Germany. “When Bruce went to Germany, he actually saw one of these Beatlemania-like shows on The Comedian Harmonists,” Manilow noted. “I was on tour in Germany and stopped at a Tower Records store where I was shocked to see The Comedian Harmonists catalog on a whole wall. I didn’t really know this world of music, but in this Tower Records they had what they call ‘the schlager parade’ – every year’s hit parade, starting in the 20s and going all the way to the 40s. The 1931 schlager parade and the 1932 schlager parade – I bought each CD, two shopping bags of CDs, and took them home. I studied what they played and how they wrote. That’s how I started, with music. I immersed myself in German music for a year before I started writing anything.

Every incarnation of Harmony had another director. Currently, Warren Carlyle, a Tony-winning choreographer and an old friend, is in charge. “Twenty-eight years ago he was a backup singer on our other show, Copacabana, at the Prince of Wales Theater in London,” Sussman said. “There was a big bolero number that ended the first act, and Warren was the main bolero dancer. We knew his career was going to take off. He met Susan Stroman, became her assistant, then left alone and came to America. I would run into him all the time in the Broadway area and say, ‘Warren, we have to find something to work on together.’ And here it is. We finally did. The nice thing about working with Warren is that there’s no getting to know you. We had known each other for so long that we already knew who we were, how we agreed and disagreed, so we hit it off.

“During the pandemic, Barry, Warren and I met every Tuesday and Friday. Because it looked like we were going to be out of work for a while, we decided to see what else we could come up with, try something new, bold and different, so we committed to doing a new draft. The big change was putting in Cantor Roman Cykowski and having him play different characters as well.

Because the Grammy committee knew that Manilow was doing a musical on The Comedian Harmonists, he was asked to present an award to Cykowski. Manilow agreed, then asked, “’Where does he live? Israel? New York?’ They said, ‘He lives in Palm Springs.’ Turns out he lived two blocks from me. I walked the dogs outside his house all those years while I was writing songs for his character, and I didn’t know he was there. It was too much!”

One thing the three collaborators agree on: Harmony is well placed in the Museum of Jewish Heritage, a temple of remembrance – and The Comedian Harmonists are men to be remembered.

Correction: An earlier version of the article stated that the day Barry Manilow and Bruce Sussman met was May 1, 1972. It was May 31, 1972. 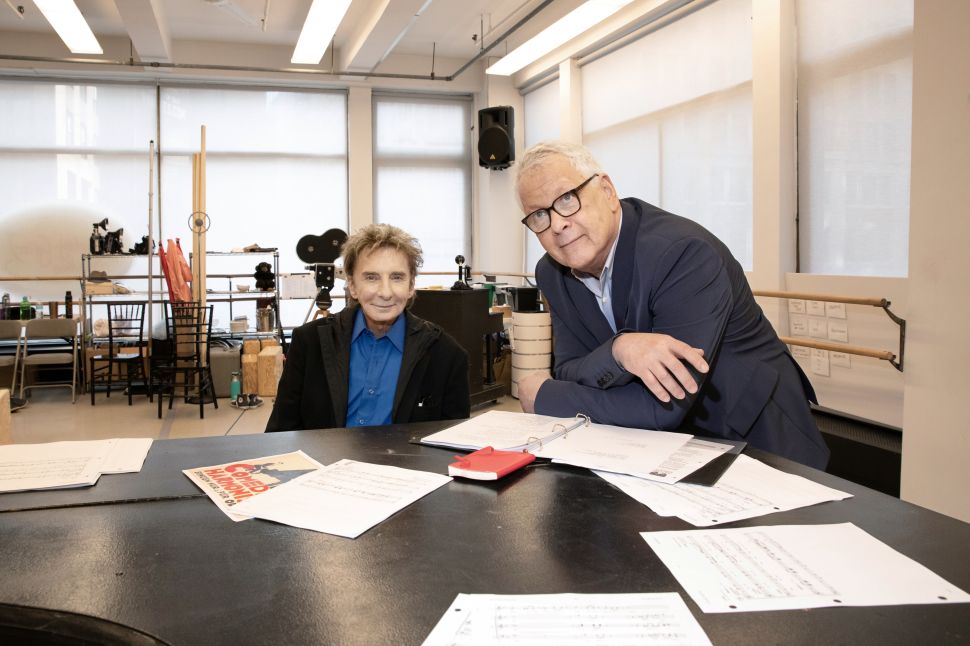